Back in January of 2015 I ordered 60 amorphophallus titanum (arum titan) seeds off eBay, and have since been selling all of them except for one for myself to keep. These are grown in pro-mix HP potting mix with mushroom compost mixed in to hold the soil together better. Once they had leaves completely unfolded, I started fertilizing them with water soluble miracle gro. I also added in some epsom salts, myccorhizae, and azomite to make sure they have the nutrients they need. Almost all of them came up, some sooner than others. It has been an entire year, and now almost all of these plants are in the hands of others.

They took 2-3 weeks to start sprouting roots and nubs.

In 2 months, they started producing their first petioles. These did not fully unfold until at least 3-4 months. I had them on a heating pad, and 4 T5 lighting bulbs to speed up the process.

By the 3-4 month mark these guys have started to have fully unfolded petioles which continue to grow for a while until they are fully unfolded. First petioles usually have 5 leaflets.

In this period, some of them have started to produce their 2nd petiole. Each successive petiole usually grows to a larger size than the parent plant. New new petioles will grow to full size before the older ones die off in the beginning, but once they get to a more mature size, this plant will start entering dormancy periods.

Here's a nice size up on a new petiole next to the old one.

Some more on their 2nd petiole.

By the 5-6 month mark some of them have completed growing their 2nd petiole while some of them are much slower. Some keep their old petiole on while others will lose it once the new one is grown. Most of them are still on their 1st petiole. The ones on their 2nd have a noticeably thicker and taller stem however the leaves are not that much greater in size. I start up-potting them to 2.5 gallon pots once they are bigger.  Their stems generally have more spots. I have already started selling off some of these plants at this point. 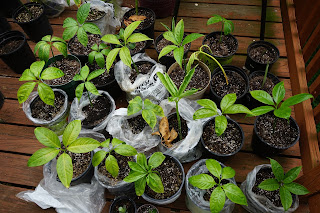 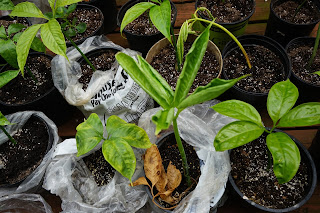 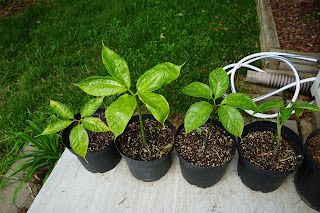 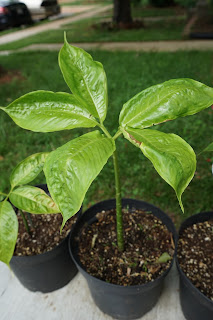 By the 6-7 month from seed mark, many of them are on their 2nd petiole.Here are a couple plants with massive 2nd petioles, getting up to 7 leaflets on their petiole. I have been selling these at this point since many of them are over 2ft in height already, and will get tougher to ship if they get any bigger. If you've purchased a titanum off eBay in 2015, there's a chance it could have come from my collection. These 2 have about a golf ball sized corm at this stage, getting close to 2 inches in diameter. 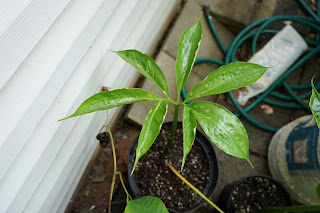 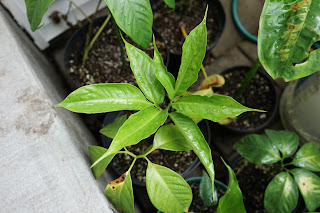 The one on the far right is my a konjac which has noticeably way more leaflets at the same size as a 2nd petiole titanum. 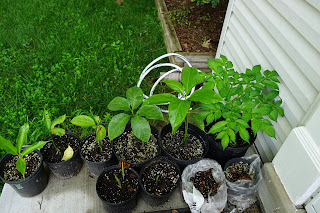 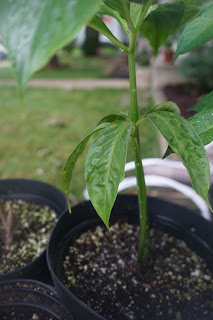 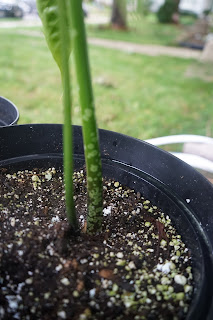 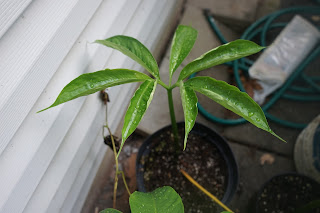 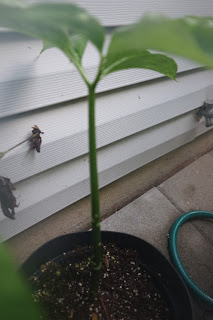 Some of them which got sun-burned when it got into the mid 90s have recovered. Once an a titanum gets stressed to the point where the main petiole gets damaged or destroyed, it will go dormant temporarily, and gather itself to shoot another petiole with it's stored energy. This one is a bit larger than an average 1st petiole however it only has 4 leaflets since it's main petiole was destroyed, and sucked it's energy back into the corm temporarily. 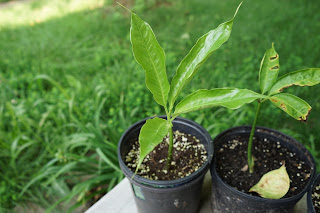 By the 8-9 month mark, some of the ones I still haven't sold are starting to produce their 3rd and 4th petioles. At this point it is possible to produce multiple petioles simultaneously. The largest ones have corms up to a plum size diameter, getting up over 2 inches on their corms, and will only get bigger with more photosynthesis.

Here are some of my biggest ones before they were sold. 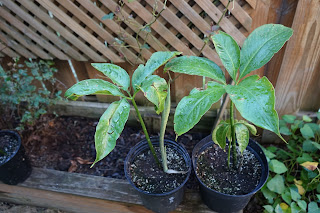 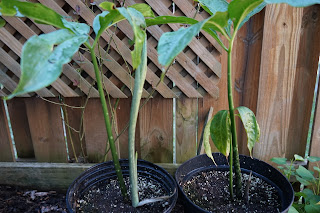 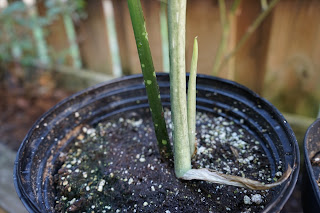 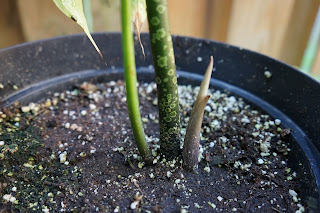 Here's how much they grew in 1 week from the previous pictures right before they were shipped away. This shows how the 3rd petiole is not necessarily larger than the 2nd right away, but within another month of growth, it will tower over the 2nd. 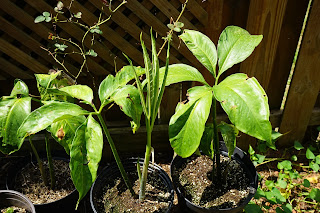 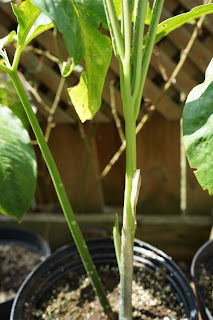 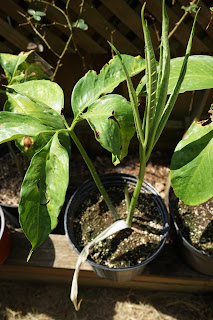 Here's a line of them from smallest to biggest. 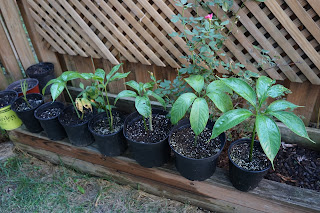 They keep growing and producing new petioles well into August. 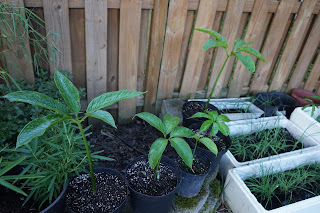 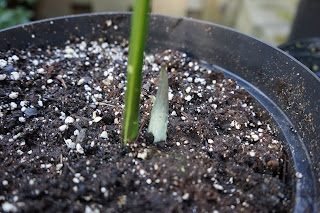 9-10 month mark.
Here's one of them that went dormant after it's initial petiole for around 3 months. It ended up simultaneously putting out 3 new petioles. 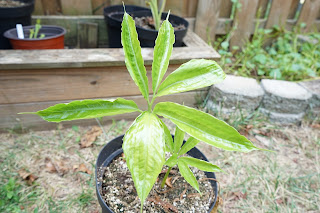 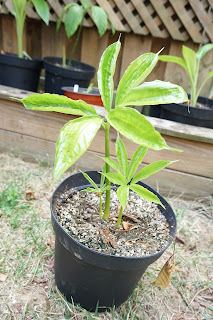 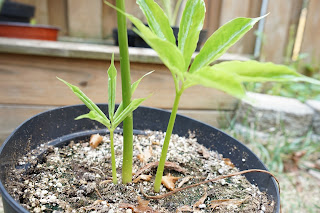 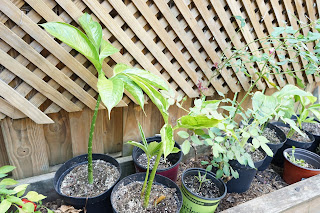 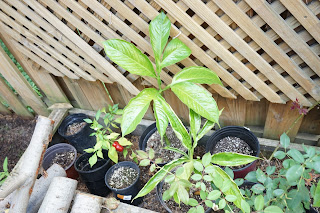 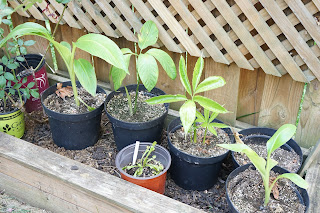 Right now, I have only saved one of them for myself. This one happened to have been kept indoors most of the time through the summer, and it has not put up any new petioles however it's corm is still continually expanding. It will likely make a petiole in the spring. I have limited window space so it doesn't make sense for my to grow lots of them. Right now, some of you guys that have my plants may have petioles at the 3ft mark given that they have grown for an entire year. 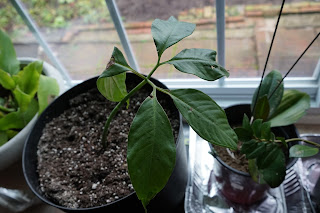 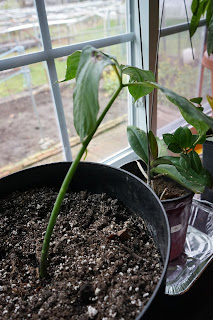 Steve Lau
Growing exotic Plants in Upstate New York, zone 6a. Gardening is one of my hobbies I do with pride and enjoy sharing with the rest of the world. If you want to contact me, my information is: stevelau1922@gmail.com