My bamboos have finally reached their full glory as they become fully leafed out in the fall, and become energized in preparation for shooting season next year which should produce shoots that rise above 20 feet if I'm lucky.

Phyllostachys edulis moso bicolor: This one is getting pampered more than any other bamboo since the soil has been prepared with hundreds of pounds of organic manure with a mixture of manure, compost, worm castings, scraps, and topped with grass clippings. I added the roofing rubber to keep the area insulated so rhizomes can be encouraged to spread.

some of my garden harvests

Here's just a few pictures of some of the vegetables I grow in my garden. I grow varieties of vegetables than just this, but this is just a picture overview of the the garden. It really doesn't take a green thumb to create huge harvests. I simply prepare my gardening beds very well with manure, compost, and use aerated compost tea up until around August. Then I just leave the sprinklers on since watering is probably the most important part to getting good harvests. There's no need to buy vegetables when you can grow your own.I'm actually not the one that does the harvesting. I just enjoy growing plants and watching them grow.

I may have already started this thread on the forums however this project has had better results than I expected. The idea is that grass clippings will gradually decompose and produce heat which can escape easily however when there are pieces of roofing plastic placed over it, a lot of the heat will be trapped. Since it is well known that bamboo as well as other plants will grow faster at higher temperatures, an addition of several degrees should increase the spread of rhizomes especially because the moisture is also held in a lot better.

Update on the sempervivums and other succulents

After the summer, most of my succulents are pretty much done growing and looks a bit dried up, but the rain  late in the season is helping them out.


Most of the sempervivums have produced their own chicks despite starting from small cuttings, some producing more than others, but overall I'm satisfied with their performance. Some of them disappeared out of thin air and I'm assuming that they were eaten by some kind of animal because I don't see their remains. 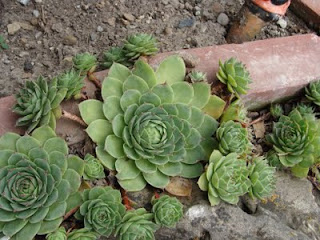